The Importance Of Liability In A Car Accident

South Carolina is an at-fault state, meaning the liability determination is of utmost importance. This liability decision is usually decided at the scene by an investigating police officer. It is rare for an on-duty police officer to actually witness a motor vehicle accident as it occurs. Accordingly, an officer must apply their training to the best information they have available, which generally includes witness statements, the statements of the parties involved and physical evidence such as the location of the impact and skid marks. As the word “accident” implies, most motor vehicle collisions are not intentional, but rather the result of negligence on the part of the at-fault driver.
Examples of Negligence in a Car Accident

In South Carolina, drivers have a duty to operate their vehicle in accordance with the rules of the roadway, and in absent of a specific law or rule, in a manner consistent with a reasonably prudent person. Common examples of negligent driving include speeding, texting while driving, drinking and driving, following too closely, failure to brake and failure to yield the right of way. A violation of a rule or statute is negligence, per se, meaning it is negligent as a matter of law.

What Is A Wrongful Death Claim Under SC State Law?

Under South Carolina law, a wrongful death claim arises where a person’s death was “caused by the wrongful act or neglect of another” and the deceased person would have been entitled to recover damages from the liable party if he or she had survived. A wrongful death claim allows the deceased victim’s surviving family members or estate executors to bring a claim for damages for the loss of their loved one. Read More

What Steps Do I Need to Take if I Have Been Injured in a Car Wreck in South Carolina?

There are a number of steps that are important to take if you have been injured in a car wreck in South Carolina, both for your health and for the viability of any future personal injury case. Read More

What Types of Accidents Generally Cause Catastrophic Or Serious Injuries?

Automobile accidents are broken down into two separate claims – property damage, which is damage to the vehicle, and injuries to the people, referred to as the bodily injury claim. The property damage claim is generally able to be processed faster and can be resolved without releasing the at-fault party for the bodily injuries. The at-fault insurance company is required to either repair your vehicle or pay you fair market value for it. The property damage claim also covers any personal property inside the vehicle at the time of the accident, such as a cell phone or sunglasses. As attorneys are not allowed to take a contingency fee on property damage claims, insurance companies often attempt to bully or strong arm drivers into settling for unfair amounts. In South Carolina, there is an arbitration process available to aggrieved drivers. A panel of up to three attorneys hear from both sides and render a binding decision as to value of the claim.

Personal Injury Protection (PIP) benefits are a clause in insurance policies that pay for your initial medical bills and may cover other up front expenses such as lost wages. It is important to check your policy’s declarations page to see if you have the clause in your policy. Not all insurance companies offer the coverage and some limit the amount of coverage. In South Carolina, upon request, insurance companies will generally agree to pay the driver directly, as opposed to paying medical providers directly.

South Carolina requires drivers carry $25,000/$50,000 in uninsured motorist coverage. This would take effect in several situations. First, if you are involved in an accident with a driver who is at fault but who does not have insurance on their vehicle, your insured coverage will take effect. Another common example is in a hit and run scenario. Uninsured coverage applies, as without knowing the identity of the driver, it is impossible to know if they have insurance coverage. Uninsured coverage applies when an at-fault driver does not have enough insurance coverage to compensate you for your damages. As a Myrtle Beach accident attorney since 2006, I have handled hundreds of uninsured and underinsured claims.

What Can Be Claimed As Damages?

The most obvious answer is medical bills and related expenses. Other damages include pain and suffering, lost wages, compensation for scarring, loss of consortium, emotional distress and even mileage. Essentially, anything that you would not have been forced to spend apart from the accident can be claimed as damages. Please call Will Parker Law at (843) 357-4111 for a free consultation.

Contact Us Today & See What Will Can Do For You 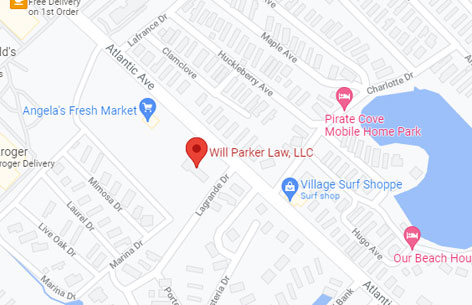